Contraceptive Used in Africa May Double Risk of H.I.V. 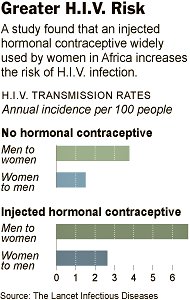 The most popular contraceptive for women in eastern and southern Africa, a hormone shot given every three months, appears to double the risk the women will become infected with H.I.V., according to a large study published in The Lancet Infectious Diseases on 4 October 2011. And when it is used by H.I.V.-positive women, their male partners are twice as likely to become infected than if the women had used no contraception.

The findings potentially present an alarming quandary for women in Africa. Hundreds of thousands of them suffer injuries, bleeding, infections and even death in childbirth from unintended pregnancies. Finding affordable and convenient contraceptives is a pressing goal for international health authorities.

But many countries where pregnancy rates are highest are also ravaged by H.I.V., the virus that causes AIDS. So the evidence suggesting that the injectable contraceptive has biological properties that may make women and men more vulnerable to H.I.V. infection is particularly troubling.

Injectable hormones are very popular. About 12 million women between the ages of 15 and 49 in sub-Saharan Africa, roughly 6 percent of all women in that age group, use them. In the United States, it is 1.2 million, or 3 percent of women using contraception. While the study involved only African women, scientists said biological effects would probably be the same for all women. But they emphasized that concern was greatest in Africa because the risk of H.I.V. transmission from heterosexual sex was so much higher there than elsewhere.

“The best contraception today is injectable hormonal contraception because you don’t need a doctor, it’s long-lasting, it enables women to control timing and spacing of birth without a lot of fuss and travel,” said Isobel Coleman, director of the women and foreign policy program at the Council on Foreign Relations. “If it is now proven that these contraceptions are helping spread the AIDS epidemic, we have a major health crisis on our hands.”

The study, which several experts said added significant heft to previous research while still having some limitations, has prompted the World Health Organization to convene a meeting in January to consider if evidence is now strong enough to advise women that the method may increase their risk of getting or transmitting H.I.V.

“We are going to be re-evaluating W.H.O.’s clinical recommendations on contraceptive use,” said Mary Lyn Gaffield, an epidemiologist in the World Health Organization’s department of reproductive health and research. Before the meeting, scientists will review research concerning hormonal contraceptives and women’s risk of acquiring H.I.V., transmitting it to men, and the possibility (not examined in the new study) that hormonal contraceptives accelerate H.I.V.’s severity in infected women.

“We want to make sure that we warn when there is a real need to warn, but at the same time we don’t want to come up with a hasty judgment that would have far-reaching severe consequences for the sexual and reproductive health of women,” she said. “This is a very difficult dilemma.”

The study, led by researchers at the University of Washington and published in The Lancet Infectious Diseases, involved 3,800 couples in Botswana, Kenya, Rwanda, South Africa, Tanzania, Uganda and Zambia. In each couple, either the man or the woman was already infected with H.I.V. Researchers followed most couples for two years, had them report their contraception methods, and tracked whether the uninfected partner contracted H.I.V. from the infected partner, said Dr. Jared Baeten, an author and an epidemiologist and infectious disease specialist.

The research was presented at an international AIDS conference this summer, but has now gained traction, scientists said, with publication in a major peer-reviewed journal.

The manufacturer of the branded version of the injectable, Depo-Provera, is Pfizer, which declined to comment on the study, saying officials had not yet read it. The study’s authors said the injectables used by the African women were probably generic versions.

While at least two other rigorous studies have found that injectable contraceptives increase the risk of women’s acquiring H.I.V., the new research has some strengths over previous work, said Charles Morrison, senior director of clinical sciences at FHI 360, a nonprofit organization whose work includes researching the intersection of family planning and H.I.V.

Those strengths include the fact that researchers followed couples and were therefore able to track transmission of H.I.V. to both men and women. Dr. Morrison said only one other less rigorous study had looked at whether hormonal contraception increased the risk of infected women’s transmitting the virus to men.
“This is a good study, and I think it does add some important evidence,” said Dr. Morrison, who wrote a commentary accompanying the Lancet article.

Although the study has limitations, including its use of data not originally intended to determine the link between contraceptive use and H.I.V., “I think this does raise the suspicion” that injectable contraceptives could increase transmission risk, he said.

Why that would occur is unclear. The researchers recorded condom use, essentially excluding the possibility that increased infection occurred because couples using contraceptives were less likely to use condoms.

The progestin in injectable contraceptives appears to have a physiological effect, scientists said. Renee Heffron, an epidemiologist and co-author of the study, said research examining whether the hormone changes genital tissue or vaginal mucous had been inconclusive. Studies in macaques found that progestin thins vaginal tissue, she said, “but studies among women didn’t show the same amount of thinning.”

It could be that progestin causes “immunologic changes in the vagina and cervix” or could increase the H.I.V.’s “ability to replicate,” Dr. Morrison said.

At one point, the researchers measured the concentration of H.I.V. in infected women’s genital fluid, finding “there was more H.I.V. in the genital fluid of those using hormonal contraception than those who aren’t,” Dr. Baeten said, a possible reason men might have increased risk of infection from hormonal contraceptive users. Those women “don’t have more H.I.V. in their blood,” he said.

The researchers also found that oral contraceptives appeared to increase risk of H.I.V. infection and transmission, but the number of pill users in the study was too small to be considered statistically significant, the authors said.

Previous research on the pill has been more mixed than with injectables, which could have a greater impact because they involve a strong dose meant to last for three months, Dr. Baeten said.

In another troubling finding, results from the same study, published separately, showed that pregnancy also doubled the risk of women’s contracting H.l.V. and of infected women’s transmitting it to men. That may partly be due to increased unprotected sex, but could also relate to hormones, researchers said.

But there are no simple solutions, the authors acknowledge. Any warning against such a popular contraceptive method may not only increase complications from pregnancy but increase H.I.V. transmission, too, since pregnancy itself may raise a woman’s risk of H.I.V. infection.

First, the researchers and others say, greater emphasis should be placed on condom use along with hormonal methods.

Some experts, like Dr. Morrison, favor a randomized controlled trial for more definitive proof, but others question how to “randomize women who may have strong preferences about their contraception,” he added.

Dr. Ludo Lavreys, an epidemiologist who led one of the first studies to link injectable contraceptives to increased H.I.V. risk, said intrauterine devices, implants and other methods should be explored and expanded. “Before you stop” recommending injectables, he said, “you have to offer them something else.”